The feature event was the $35,000 Friends of the Royal West, Perron & Partners Cup 1.45m on a challenging course described by designer Werner Deeg as “very technical”. The 32-horse field was whittled down to a jump-off featuring eight of the most exciting performers here this week.

In the end it came down to razor-thin margins as every horse but two ran clean. Hermelien with Ali Ramsay aboard prevailed setting down a blazing 33:01 seconds as the first rider out. The key was a quick pivot into jump number three. “I tried not to get caught pulling coming into it, that saved me a lot of time. I don’t know how lucky I am or how I got to have a horse like Hermelien. She tried her heart out. She’s incredible.” 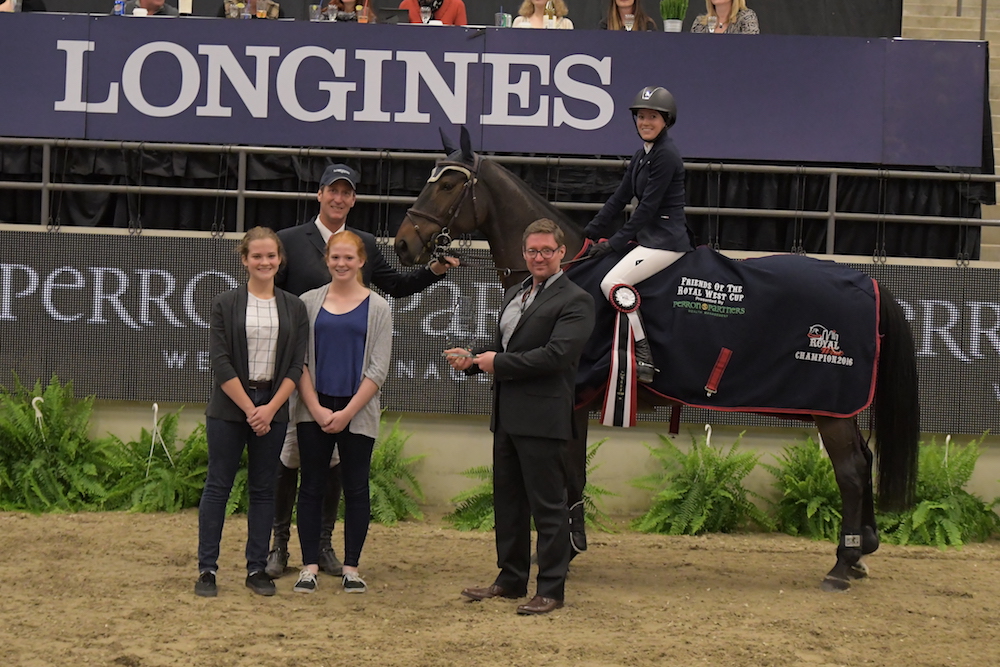 That was just enough to edge out Keean White on Hera van de Kouterhoeve who also went clean but came in 0:18 seconds slower on the tight jump-off course. “Ali really laid down a fast time in the jump off. So I had to take a little more risk than I might have wanted to. We’ve had a good rivalry going, and her horse is very competitive.”

Both riders praised Deeg’s layout in the main part of the competition. “I love a course that doesn’t try to kill the horses,” said Ramsay. “It makes demands on the riders. You didn’t have a chance to catch your breath, you were always working, always turning.” Added White: “When I walked it before the competition I thought we might have 14 or 15 clears. But we only had eight. That’s Werner. It didn’t kill us with size. It made you ride the whole way.”

Royal West president John Anderson, who finished the jump off in eighth after clipping a rail, was complimentary about the winner. “It’s great to see Ali here. Last year was her second year in FEI, and as she’s shown representing Canada she’s really come a long way. She belongs there.”

Cory Jackson of Perron and Partners, the evening’s sponsors, was thrilled with the drama. “There’s a huge appetite in the fall for an indoor equestrian competition here in downtown Calgary. People love the sport and this is a great tradition starting here at Royal West with these great athletes and horses.”

In third place was Tamie Phillips (who rode twice in the jump-off) aboard Cat Balou in 34:99. Fourth place went to Cartoon ridden by Brian Morton in  35:28, while fifth was captured by Prim’ de LairaudLaura Jane Tidball of Canada in 38:34.

Earlier in the day, it was a double for Canada’s Jill Henselwood in the $1,000 Royal West Championship 1.30m. Riding Duncan she captured the top spot while riding Inspector Gadget JPS to third place earlier. Bailey Ritche Harding slipped in between Jill’s two entries with True Colour earning second spot.

Results for all the classes on Friday day can be found at http://showgroundslive.com/rmsj/results/DailyResults

The action all culminates on Oct. 29 with the $132,000 Longines FEI World Cup™ Jumping Calgary presented by pandaHAUS. Tickets are available for all nights at $10 general admission.