A field of 35 started on Werner Deeg’s testing course but was narrowed to 14 clears for the jump-off. When the action wound up it was a familiar name atop the results. Chile’s Samuel Parot forged a time that stood up with the first ride of the jump off, blazing home in 36:24 aboard Quick du Pottier.

The superb ride was in spite of a leg injury that keeps restricting his riding. “I re-injured the leg on Wednesday, and it makes it very hard for me to go to the right.” Asked about how he could take a conventional route around the course with no gambles, he says, “This is a very fast course. I don’t feel like I have to take a gamble to find time with this horse.”

In second was the German rider Christian Heineking aboard AJE Cluny. His time after a bold shortcut into the final jump was 37:07. “I knew Samuel was going ahead of me and would be fast, but I always planned to take the inside path to the final jump. I really enjoy this venue, and I’m glad I got this ride in tonight in preparation for Saturday.”

Third place went to Chris Surbey of Canada, just a tenth of a second back of Heineking aboard Chalacorada.  In the fourth was Samuel Parot again, this time with Kanisso while Canada’s Julia Stanley in 49.95 took fifth.

Course designer Deeg says that he wasn’t surprised by Parot’s fast start in the jump-off. “He’s always fast. And you have such good footing here that Sam’s horses can really make good times here. It will make it a really exciting test on Saturday.”

Earlier in the day it was Phase Two of the $25,000 Hunter Derby 3’6 National Qualifier and Western Finals Championship, presented by Salentein Wines. Brent Balisky had notched an impressive first and third place in Phase One on Wednesday. 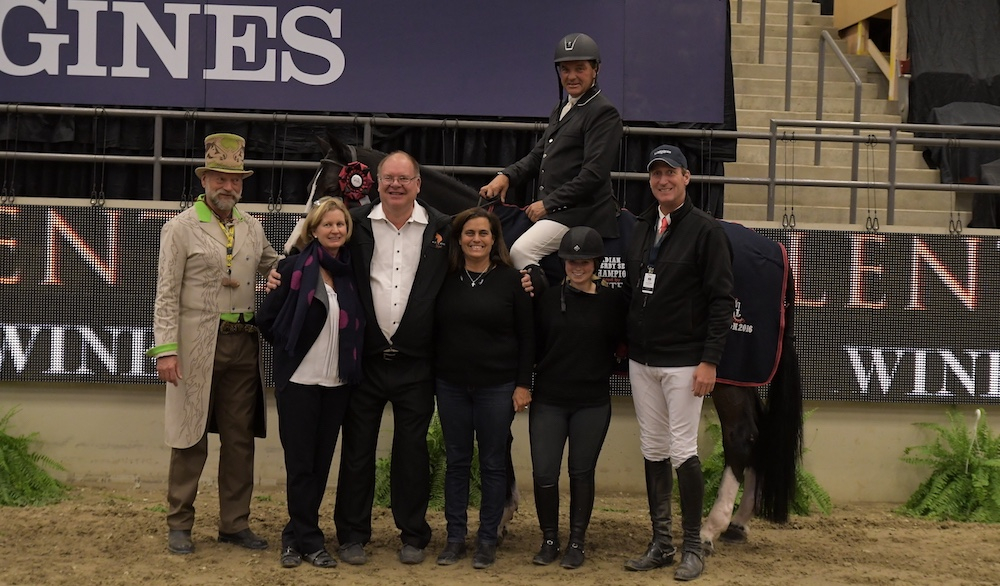 Thursday it was more of the same as he guided Classico to first place with 101 points and Easywalker to third with 94.5. Michaela Ralph broke up the sweep scoring 95 points to take second place.

That meant Balisky swept the the overall championship in the event with Classico in first, Easywalker in second and Easystreet  in third.

Results for all the classes on Thursday can be found at http://showgroundslive.com/rmsj/results/DailyResults