Oct. 25, 2016, Calgary, Alberta:  It was another night of hot competition as the countdown continues at the 2016 Royal West for the prestigious $132,000 Longines FEI World Cup™ Jumping Calgary presented by pandaHAUS Equestrian on Oct. 29.

The feature event of the evening was the $35,000 pandaHAUS Welcome Speed 1.45m. From the long initial gallop to the tight turn into the final jump, riders tried to solve Werner Deeg’s course. Solving the riddle was Canadian Keean White aboard Carrera van het Westleven Z, fashioning a clean ride in a blazing 70.47 seconds.

White gambled and won by taking a tight route into the final jump. “It was a big advantage to go late in the field to see what others had done.” said White. “I was already leading with Carrera so I could go inside on Number 3 jump to pick up time. Even if I caught a rail I might still be in the money. As it was, it all worked out, and I finally beat Sam (Parot).” 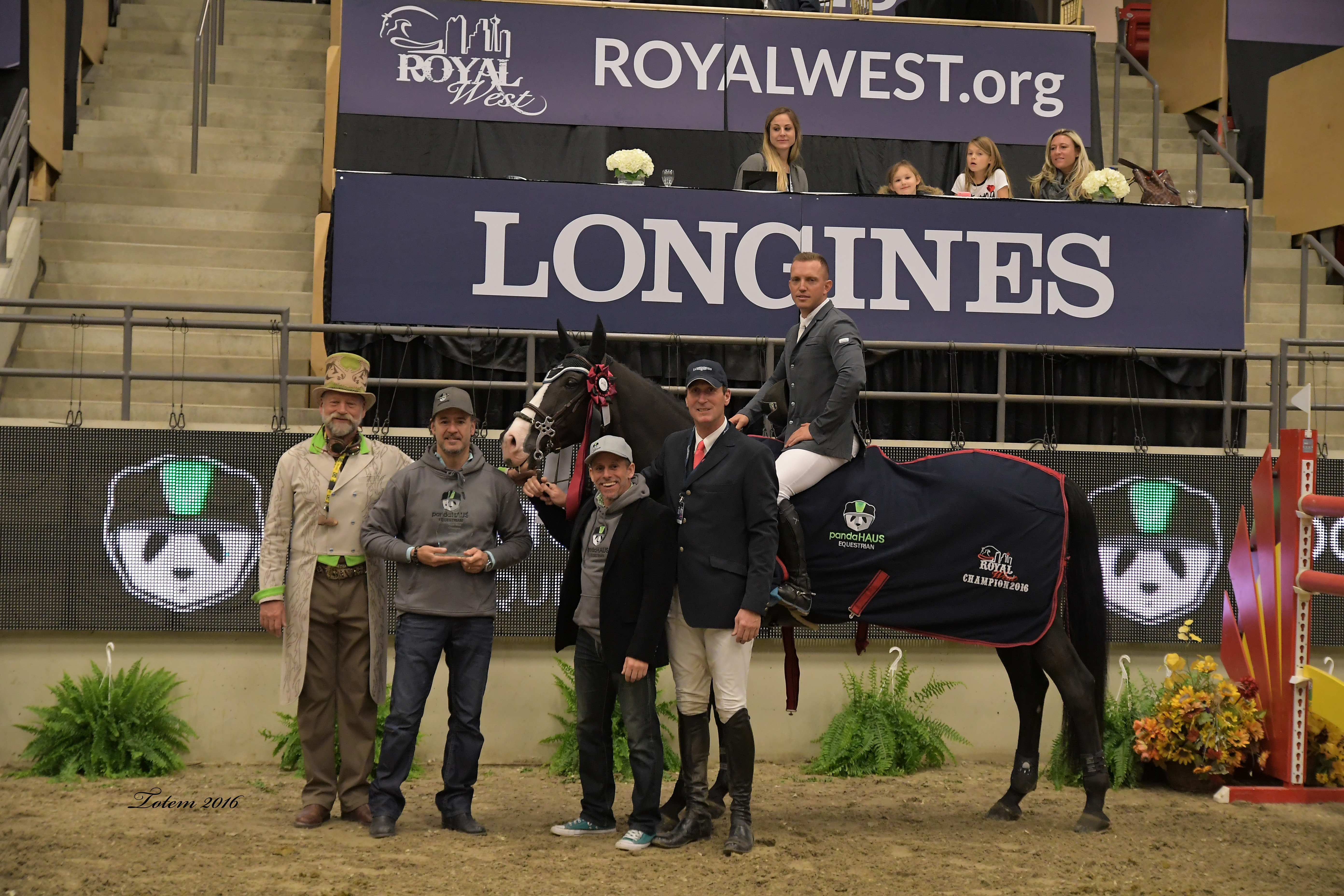 He was full of praise for Carrera. “She has a big stride and is a fun horse to ride, She’s very game, she’s a winner, always wants to win.”

In second was another familiar name at Royal West, Samuel Parot of Chile on JK Horsetrucks Chantilly. The veteran was just over a second behind at  71.36. Despite accumulating four faults, White and his mount Hera van de Kouterhoeve slipped into third place with a time of 71:79 seconds.

Z Diamanty with Erynn Ballard aboard took tour faults but finished fourth in the evening’s prime attraction.  Vanessa Mannix of Calgary also took four faults on Nirvana de Turlong to capture fifth place. Knowing this was a Table C competition, I knew that even if I caught a rail I could keep going and still have a chance for a good finish.”

Royal West president John Anderson took both sixth place (aboard Granit S) and seventh place (on Terrific). “I’m trying hard to find the seconds to catch Keenan but I caught a rail with both of my horses, so it wasn’t to be.”

Daniel Lefebvre, president of pandaHAUS, the new equestrian software and sponsor of tonight, says that it’s exciting to get the world’s best riders working with the software. “It’s a beautiful ecosystem of elements with sport at its heart. And what more beautiful world than equestrian? Kids can interact with the stars of the sport, the ambassadors, to trade points for gear, talk to each other. It’s private and ad-free. What a great way to grow the sport.”

Earlier in the day the highlight was the $2,000 1.30m Open Jumper Sponsored by Hotel Arts and the $1000 1.4 m Open Jumper sponsored by Woods Automotive Group. In the 1.3m it took a jump off to settle the matter.  Jaclyn Duff propelled Stakkurus around forth gold in 44.43 seconds. Elizabeth Gingras was second aboard Captain in 47:06 while True Colour with Bailey Ritchie Harding captured third in 49:18.

Results for all the classes on Tuesday can be found at http://showgroundslive.com/rmsj/results/DailyResults